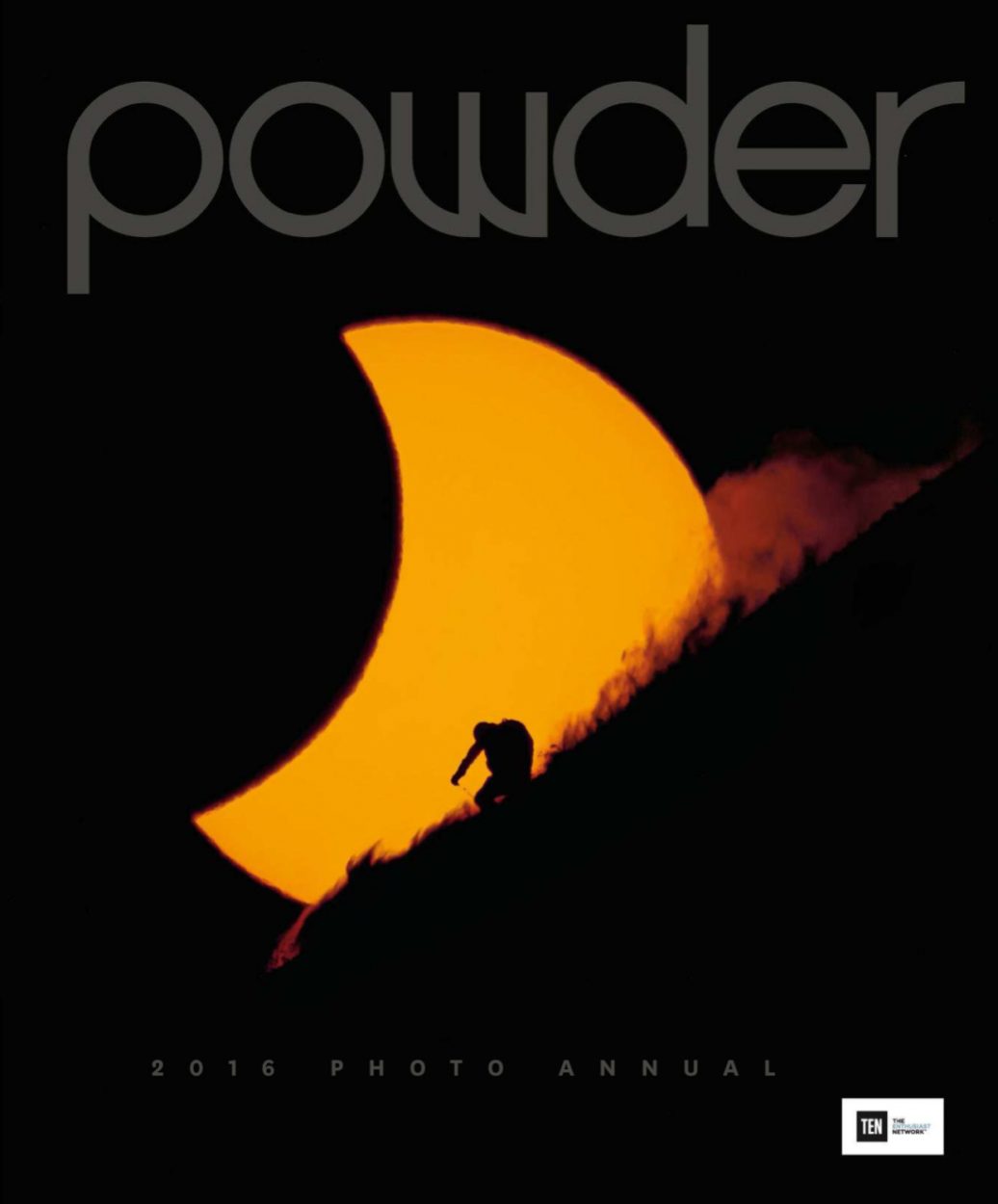 The cover of this issue of Powder Magazine featured a skier arcing a turn beneath a solar eclipse. Reuben Krabbe created the photo of skier Cody Townsend during a solar eclipse in Svalbard, Norway. My obsession level increased. Reuben’s photo was the inspiration for me to create my own eclipse photo. As I began to obsess with the eclipse, I emailed Reuben for advice about how he got his photo. He sent me an email with a wealth of information. I decided that I wanted a mountain biker under my eclipse photo because solar eclipse 2017 was happening in August.

I also asked Reuben if he would send over some photos of the eclipse for this article. He did that too. I based what I wanted for my eclipse photo on the cover shot from Powder magazine. The photos that Reuben sent over proved that many photographers think alike. I had no idea that Reuben shot the eclipse in totality until he sent me some of those photos as well.

Andrew Whiteford is one of the talented mountain bike and ski athletes that I get to photograph often. He is a dear friend. We have created tens of thousands of photos together, including 3 feature articles. Now we were creating something different with no end user on the books. I guess in a way this photo was just for us.

I emailed him a calendar entry for August 21, 2017 that stated photograph eclipse. It was a year prior to the event. He laughed, but added the date. The solar eclipse 2017 was going to remain in the back of my mind for a year.

A couple of weeks before the eclipse Andrew and I began scouting locations. We also pulled up the sun compass location and its angle in the sky. A lump formed in my throat. The sun was going to be too high in the sky for my dreams to come true. Stupid summer.

Reuben was able to create his photo of the eclipse in Norway because it was early spring. This allowed for not only shorter days, but a lower sun angle in general.

Reuben Krabbe told me that he shot his eclipse photo with a 500mm lens. I already knew that the larger the lens I used for my photo, the larger the eclipse would appear in-frame for my viewer. I had my 600mm and 2x teleconverter in waiting. 1200mm of focal length to fill my 35mm frame with solar eclipse 2017.

Knowing that I was fixated on shooting the solar eclipse with 1200mm was going to dictate a very special location. Andrew and I spent 5 days driving around the Jackson, Wyoming vicinity. I needed a ridgeline that was about a mile from the camera location. This would allow both Andrew and the eclipse to be in focus from a depth-of-field standpoint. In addition, we needed a ridge that was tall enough and steep enough to at least get Andrew close to the eclipse.

The solar eclipse 2017 was happening at about 11:35am local time. That meant that the sun would almost be at its highest point in the sky during the eclipse. The angle was almost 70 degrees from the viewer’s standpoint. Have you ever looked up at the sun during midday hours? You have to bend your neck pretty substantially. That was the lump-in-the-throat realization that I had earlier.

I had a feeling that many of the photographers shooting the eclipse would probably head in two directions because of this. The first would use a wide angle lens to get a foreground subject and the eclipse. This concept didn’t work for me because the eclipse would be tiny in the frame and I wanted 1200mm BIG. The second group would head to use a telephoto optic and only include the eclipse in the frame. This was fine for my lens choice, but I wanted more than just an eclipse in frame.

I have learned over the course of my career that Photoshop is unacceptable to most of my clients. This meant that I had to figure out how to get the photo that I wanted while not using Photoshop.

It dawned on me one day during scouting that my camera had the ability to produce in-camera double exposures. I had never used this technique, but I figured it would allow me to get the photo that I wanted. 1200mm for a mountain biker on a ridgeline and eclipse overhead. 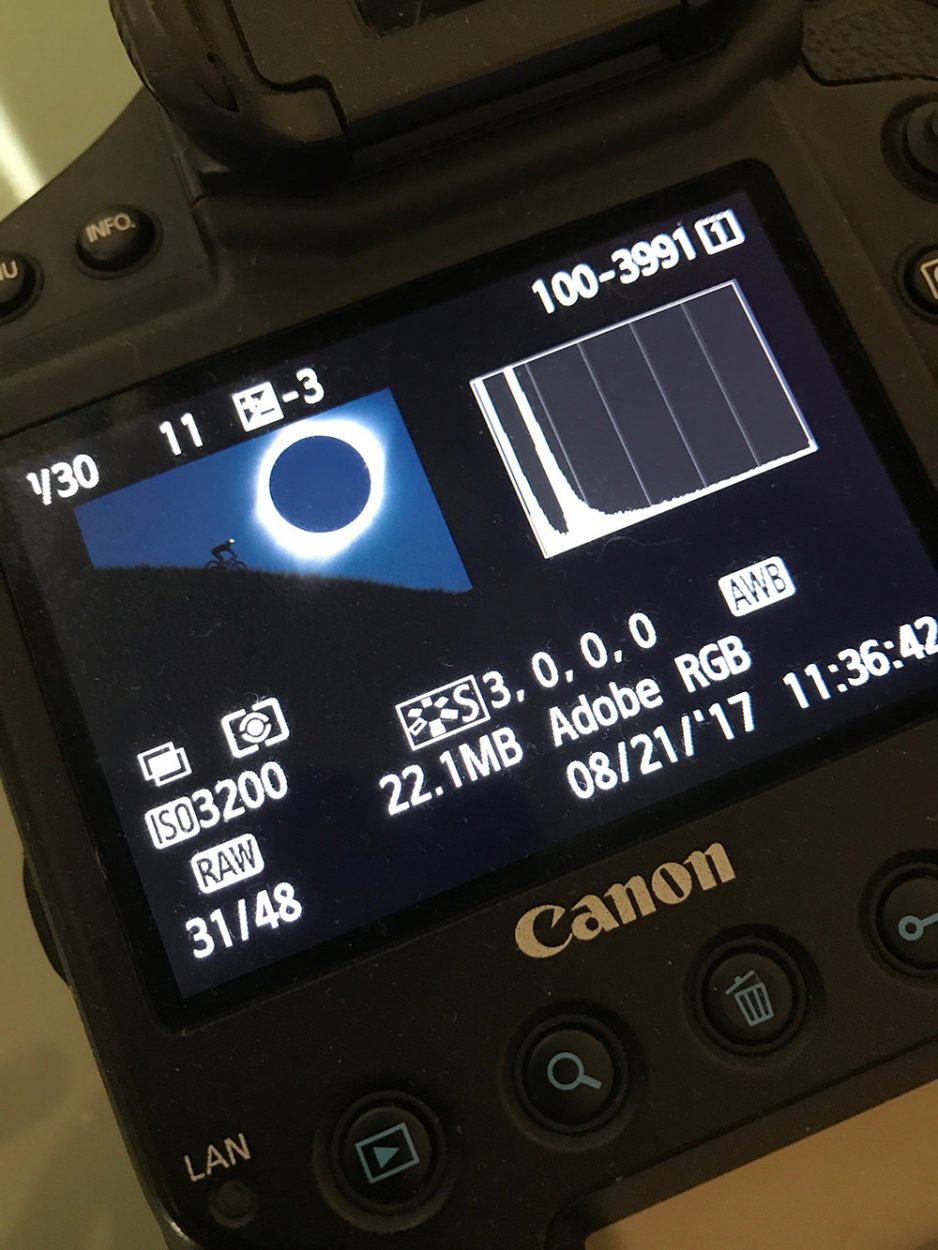 Even with the ability to produce an in-camera double exposure I still needed the proper location. In addition, I had to learn how the double exposure technique worked. Andrew and I figured out a location that put the sun directly above the ridgeline that he would ride down. My mission was to photograph totality, then pan down and add Andrew mountain biking down the ridge into my exposure. We added a light to his head so he could see and then five high-power flash lights behind him to further improve his silhouette in the frame.

This technique produced a single RAW capture in-camera. We fired off two totality photographs and my mission was accomplished as the sun headed back to partial eclipse.

By choosing to to only use 1200mm of telephoto lens for the eclipse I backed myself into bit of a corner. I couldn’t produce any other composition style because of the large distances between me and my rider. While I love the photo that Andrew and I created, it is definitely not the only answer. It just happened to be my answer. I am fairly certain that this whole process has created more questions than it has answered for me. Experiencing a solar eclipse as a photographer, and for the first time as an adult, was almost indescribable. I don’t think I will ever photograph an eclipse again though. This story has now been told for me.

Eclipse Photos Available for License on Our Stock Website