I have been trying out the social media advertising model over the course of the last month. The main reason is that I believe that I have a great product and growing brand, but we need more people to know about it. Social media seems to be an amazing way to get the word out, but after a solid month of spending, I am beginning to believe we are part of a better, more beautiful magic trick. I began to realize that what I was participating in may actually be more of a social media advertising racket than legitimate sales tool. Did the needle just skip off of your record? I am hoping so.

In the last 30 days I have thrown about $400 towards advertising on social media. That is $15 per day well above the minimum $2 entry cost. If we add that up for a 12 month period, it is a pretty low expenditure compared to traditional print advertising. Right? Right. The total monetary return on my investment was $0. Yep, nada, zero, zilch, goose egg. I could have thrown that $400 into the fire pit in the back yard and at least reaped warmth while sipping my late afternoon beer.

While we did see an uptick in traffic to my websites, those upticks did not yield anywhere near the results that we see when we actually email our marketing list. Nor did those traffic increases yield any new subscribers to our mailing list. So this led me to do a little “on the line” research.

I quickly ran a google search for “advertising media kit” and came back with a result for Outside Magazine. You should know that I am not singling Outside Magazine out for any reason. They came up in my search and I know they are a well produced magazine, with a huge readership base and their brand is similar to my brand. In fact, I have worked for them before. I followed the link I found and downloaded their advertising media kit pdf. I am going to add that it may be one of most comprehensive media kits that I have ever read. 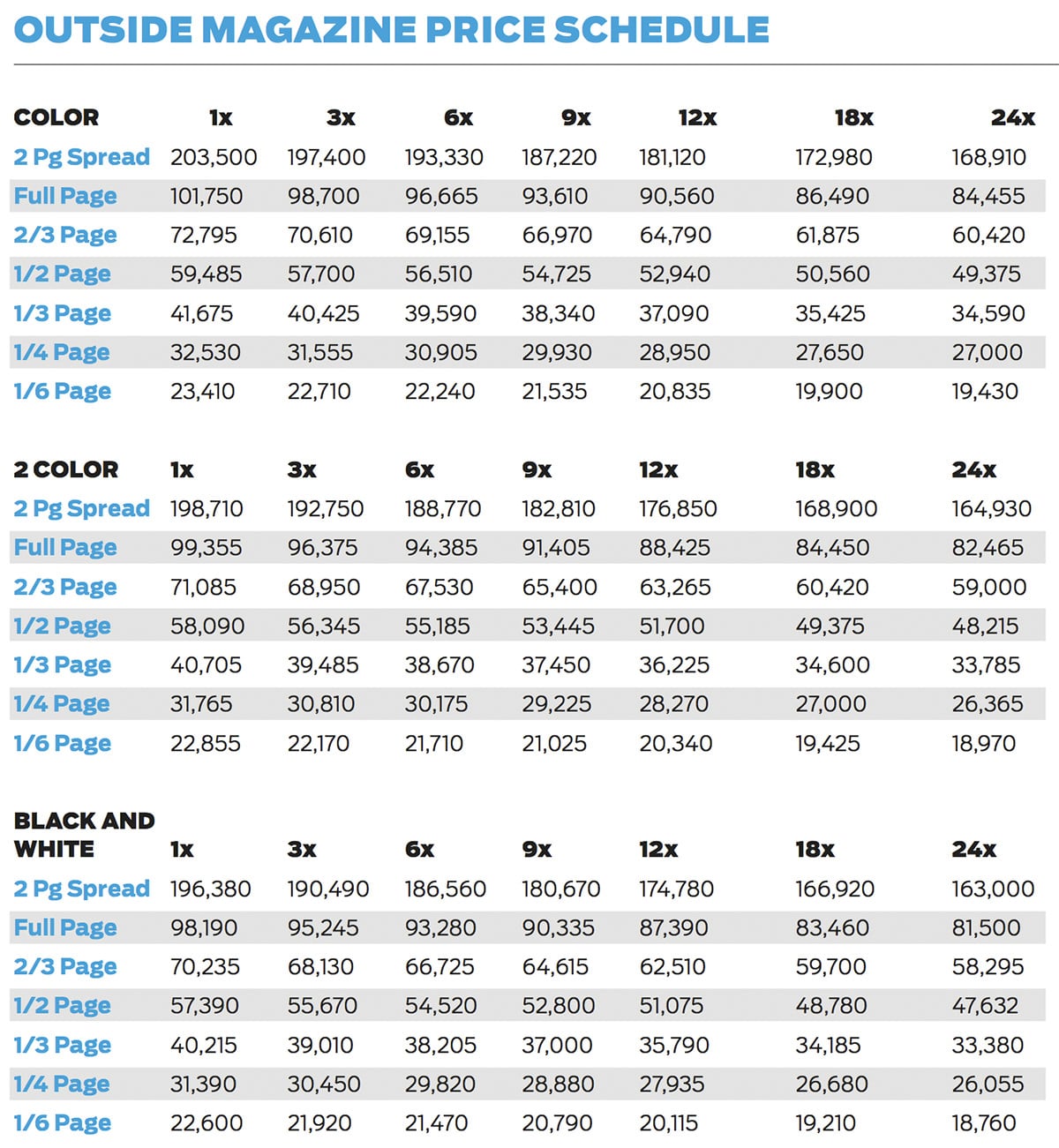 What I was specifically looking for was their advertising ad rates. There on page 12 was what I was looking for, the Outside Magazine Price Schedule. A two page spread costs $203,500 if you do it one time, in one issue. Now while you are cleaning your coffee off of your monitor know this, they have a print readership of over 2.4 Million people. That means they are printing somewhere along the lines of more than 4 Million copies of the magazine every month. Think about the involved printing cost for a single issue at those numbers.

I now had a legitimate print advertising cost in hand. Back to social media I went.

Traditionally, advertising strives to get 1% of its viewer to convert to a purchase. I am not sure how this number has come about because print advertising results are impossible to track. While internet and email based advertising seems to do better than this, it also allows you to track your metrics. Thus it produces more legitimate results.

Here is what I did… 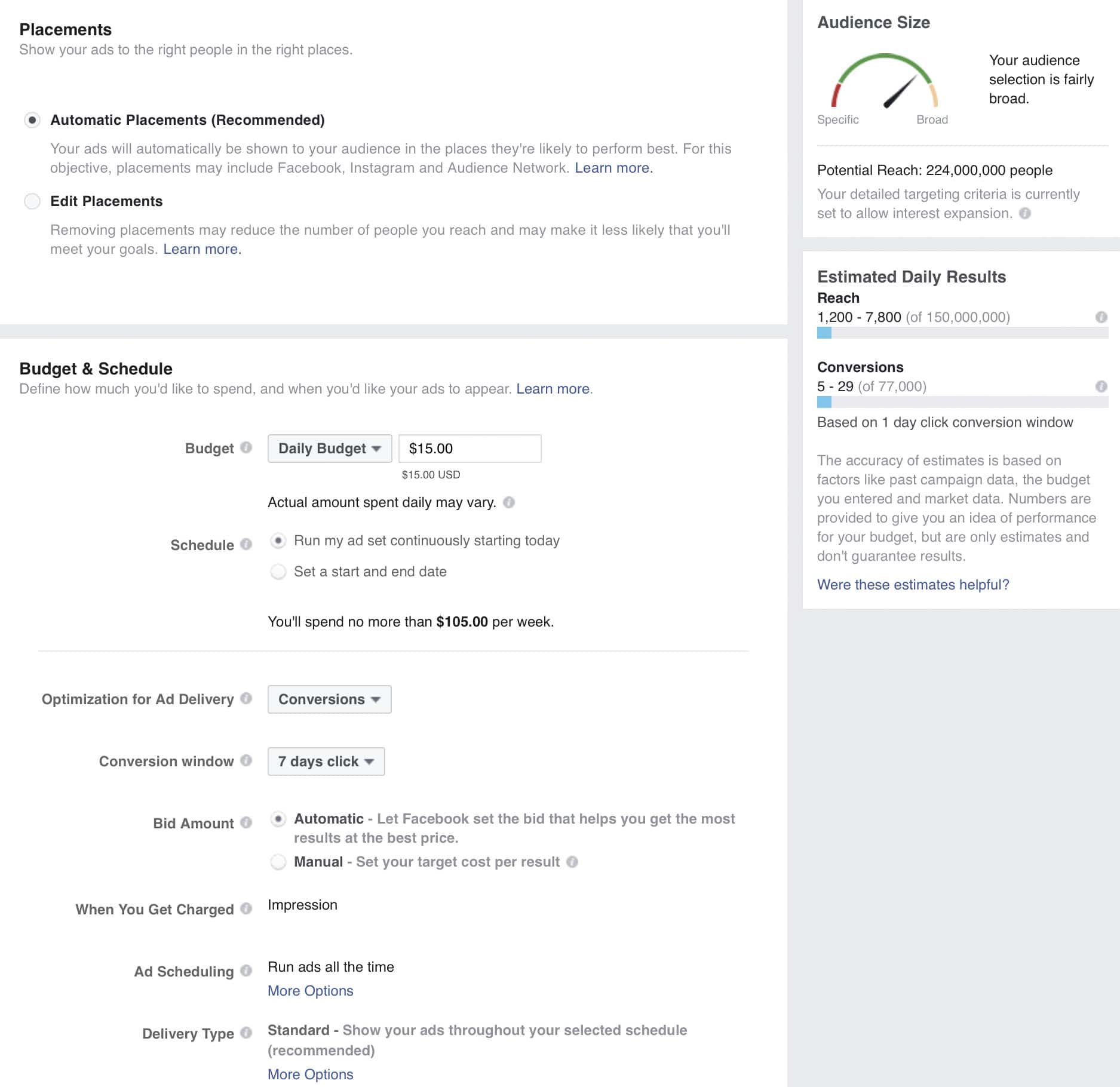 I took the 2.4 Million (readership of Outside) divided it by 30 (days in a month) and came up with 80,000 (people per day). I went into my Facebook Ad Manager, I created a new campaign. Then I added my daily budget of $15. Facebook told me that I was going to potentially reach 1,200 – 7,800 people. I could expect 5 – 29 conversions. That math produces pretty close to a 1% or better conversion rate based on the reach of my ad. 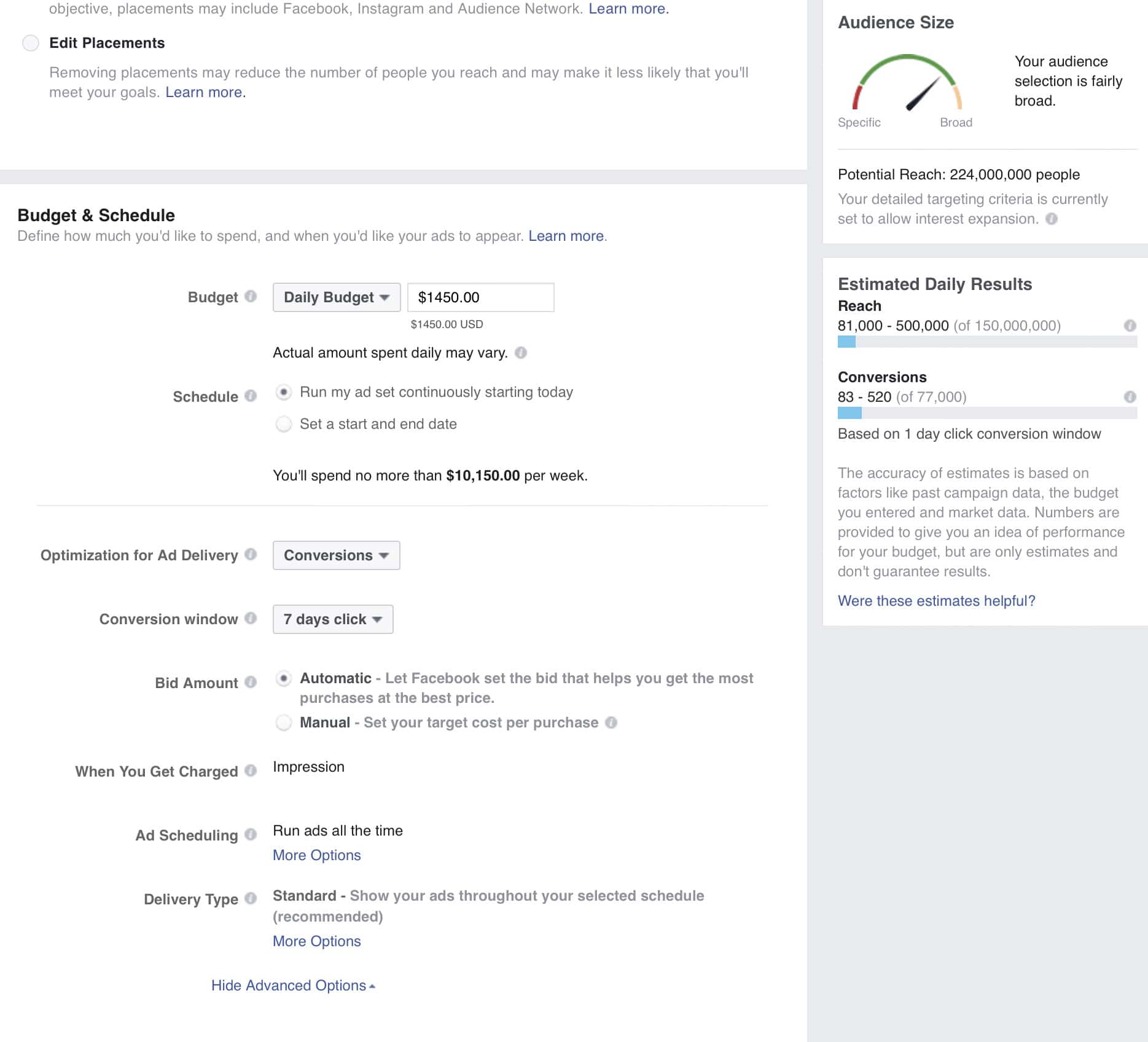 So what does this all mean?

Well for starters it isn’t all bad, nor in my opinion, is it all good. By spending less to advertise, I would have an estimated higher conversion rate, although that rate pretty much sucks banking on a meager 29 max conversions. Hence the reasoning that my $400 resulted in the major goose egg as mentioned above.

If I had the $43,500 to spend for the month, my conversion rate wouldn’t actually improve, but would decline. I would be able to promote my brand to a much larger audience though. Here is the caveat, what small business owner has $43K lying around for a month of advertising? I cannot spend that amount in a year, let alone a month. However, the large brand that could spend $203,500 on a print ad in Outside for the month could easily swing a social media ad for $43,500. They could probably do it in addition to their print ad. This effectively doubles their viewer base.

How does an action adventure photographer target buyers on social media like a wedding photographer? I guess my answer is already laid out in the previous thousand words. I burn the $400 to stay warm while I drink my $1 beer.

Why do I believe this to be a bit of a social media advertising racket? You know that the United States has a shifting class system in place. The middle class – yes I am actually part of it – is disappearing. More and more middle class people are headed to the poverty side of our society than reaching the upper class. The upper class, this includes the upper 1% is becoming more and more wealthy as the middle class feeds it. What a wonderful American Dream we have in place.

Hmmm…who would be in that 1%? Maybe the owner of a company that possesses 1 billion subscribers. If you cannot read between the lines, that would Facebook. If Facebook received $15 a day from me, and there are over 1 Billion people on the platform, do the math. Crowd sourcing works if you are the owner of the crowd.

I went to Wiki for a proper definition of what social media actually is: “Social media are computer-mediated technologies that facilitate the creation and sharing of information, ideas, career interests and other forms of expression via virtual communities and networks.”

Do you see anything in that definition related to advertising? Yes, I know you can argue the finer points of “career interests” and “sharing of information”. Nothing in that definition has anything to do with advertising, buying or selling anything. It boils down to the fact that social media began as way to “connect” and “share” “ideas”. We all signed up for it too!

The owners of all those platforms realized they had us. Addicted to catching up with lost friends and loved ones, we were hooked on its ease. Anyone could share their breakfast and new puppy with their friends. We connected with everyone we knew. Then we started branching out, you know – six degrees of separation. The owners of the platforms saw this too. Now the concept of gaining followers has a price tag attached to it. Want to be found, you have to pay. How did they sucker us into this model? I thought social media was a way to share and connect?

Almost daily I receive emails about how to increase engagement due to the new algorithms in place on Facebook or Instagram or Bob’s Low-Budget Social Media House. While no one really knows what is going on within the social media algorithms, many suspect the drop in followers and engagement is a mechanism put in place by the social media companies to force people like me to pay for more advertising. They in turn feed me a paltry 1% to satisfy my enormous hunger to succeed. In most people’s minds larger numbers equal larger success.

I wish I had the follower numbers of photographers like Jimmy Chin or Chris Burkard on Instagram, but looking at my recent study, I don’t think I could ever afford to pay the amount required to get there. And I truly do not believe that Jimmy Chin or Chris Burkard do either. They produced projects that became part of the public eye and the public found merit in following them. To me, that is a perfect example of what social media should be. The problem is that social media has become too social and weaving your way to success has become a much more difficult proposition. The sea has become cluttered with too much garbage at this point. Even producing a quality product becomes harder and harder to stand out at this point.

So you should go find some posts out there about how to increase your engagement on social media without spending a ton of money. I already told you they exist. Just Google It.

Do you remember the old days of meeting someone for a meal or cocktail? Shaking hands and talking about family, then business? Did we need the nod of 1 Billion people to become wealthy when that was a normal business behavior? Call me nostalgic, but I really like getting a two beer buzz and discussing business. I absolutely hate chasing fantasy numbers. Although, I have to say it is pretty mesmerizing. Moth Into Flame.

I would rather spend $400 to send a personally made book over to a previous or potential client, than HOPE that social media gave me a dozen of those people. I am not betting on an algorithm for success, I am betting on knowing that what I produce has value to my potential somebody. Although, burning the $400 in my fire pit while drinking a $1 beer could make for a great social media post, I would rather give someone a reason to call and thank me for a little piece of inspiration. Once that happens, I can get to know that person on a one-on-one level.

Will I Continue with The Racket

The answer is yes and no. I am only going to pay for advertising on social media when I have a new release that could benefit me by sharing it outside of my current network. I will continue to post new photos to social media because a lot of people comment and like those photos. My engagement will probably continue to drop. Which is fine – if you don’t like my photos, I don’t need you as a follower any way. I am also not going to follow anyone who doesn’t inspire me either. I am done with the follow to follow mentality. In my opinion its no different than following all those other photographers to the standard overlook at sunrise. Go read…Instagram for Photographers

I will physically knock on every person’s door that I know and invite them for a $1 beer if I feel we haven’t connected in a while. Once I have spent $2 on them, I know I will be able to talk them into the new car (photo) that they didn’t really need. And if they need my photos, I already had them at hello.

Ok I am done with this post now, I have to go call my agent. She knows people I DON’T know, I have $2 left in my wallet after all of these shenanigans.

I promise to throw up a daily photo that at least inspires one of you! My account is @jaygoodrich