Shutter Speed is the Key to Artistic Motion

Shutter Speed is the Key

The word photography is almost synonymous with the word still. Photographers take stills. Videographers capture motion. This may be the defining thought process, but it definitely doesn’t correspond to the creative side of photography. Our cameras are set up to allow almost any vision to become a reality. This is especially true when illustrating artistic motion in still photography.

When attempting to highlight motion in a still photograph we need to consider two separate, but equally import steps. The first is the technical side of the camera, primarily, which shutter speeds will allow us to highlight movement. The second, are a series of ways to move or not move the camera itself. Let’s begin with examining the camera’s shutter speed.

Here are some of the general shutter speeds available on most current DSLRs and how they work within a motion parameter.

Slow Shutter Speeds (Hours through 1/15 of a second) – These shutter speeds allow us to stop time, blur motion, and as we approach 1/15 of a second keep some parts of our subject tack sharp while blurring other components of the photograph. This becomes especially useful while panning our cameras on a moving subject.

Mid-range Shutter Speeds (1/30 of a second through 1/125 of a second) – Shutter speeds in this range allow us to begin to stop action if it were to approach us head on. It can add a combination of blur and sharpness to flowing water as well. These speeds are typically fast enough to completely freeze slower moving subjects such as portraits – especially when using an image stabilizing lens, but still can blur backgrounds when panning with a moving subject.

The artistic side of motion in still photography is going to hover from the bottom of the Mid-range shutter speeds all the way through the longest ones. Here are a series of photos taken in Great Smokies National Park that illustrate how shutter speed changes the look of flowing water.

Once we have the shutter speed settings figured out, we need to hone in on our camera movement techniques.

Stabilize the Camera with a Moving Subject

This is by far the easiest of our camera motion techniques. Put the camera on a tripod. Set a shutter speed between hours and 1/30th of a second. Create a beautiful composition and release the shutter. Anything that is moving within your composition – water, leaves, grass, etc. will become motion blurred and everything else in the frame will be tack sharp. This is how the series of shutter speed examples from the Great Smokies was created. 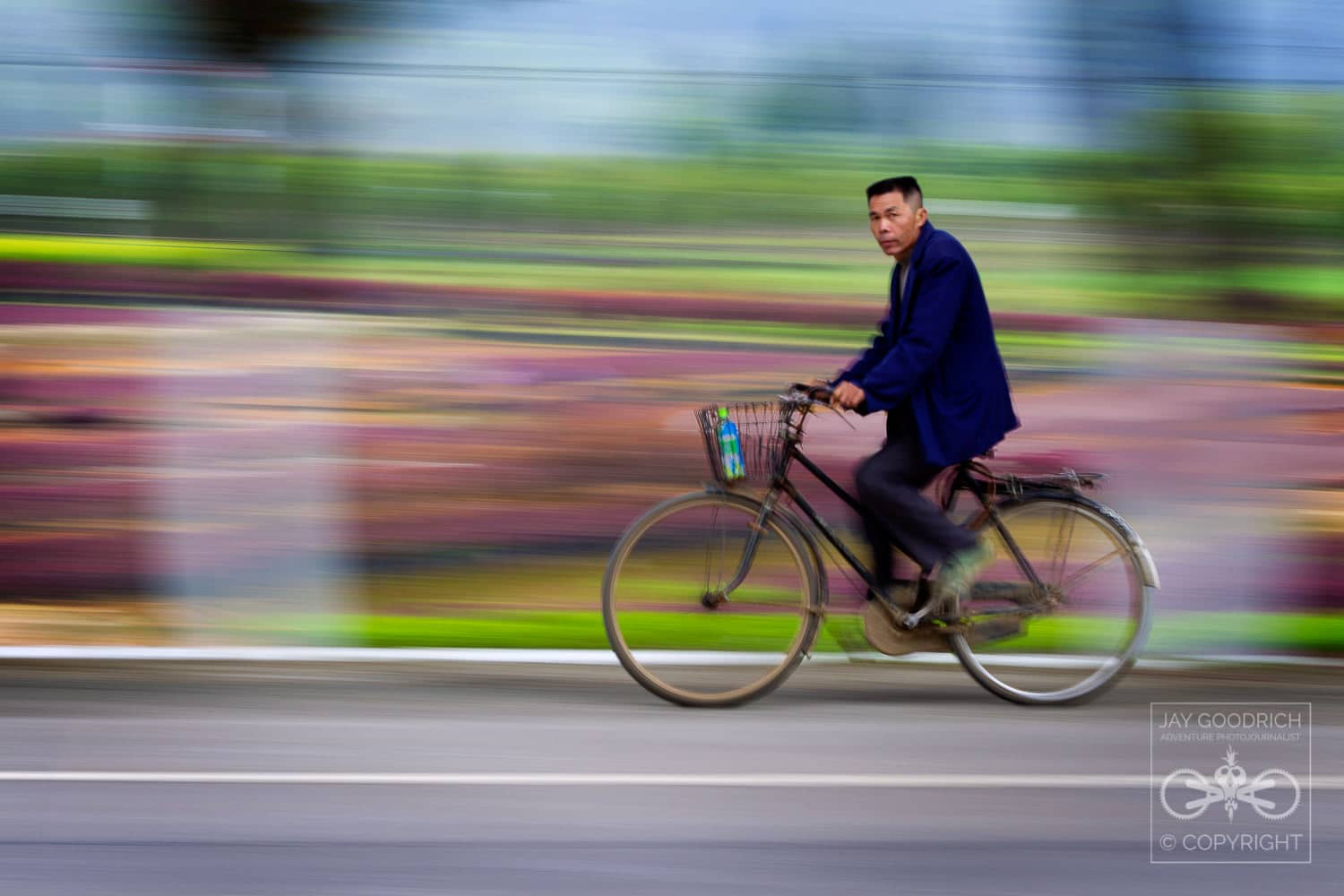 Move the Camera with a Moving Subject

I typically pan my camera with my moving subject using this technique. I often utilize it when I do not have my tripod and the light is too low to create a tack sharp photo. However, if I have subjects rolling by, like the cyclist in China above. I will purposely adjust my camera settings to give me a slow enough shutter speed to pull off this effect any time of the day. If you are in bright sunlight, adding a neutral density filter will help slow things down by taking away light in turn giving you slower shutter speeds. I prefer the quality filters offered by Breakthrough Technology.

Whenever I am panning with my subject, I will experiment with shutter speeds between a 1/15th of a second to 1 second. I also try to pan at the same rate of speed as my subject is traveling all while depressing my shutter. It will take you a few tries every time you use this method to walk away with a photo that you like.

Move the Camera or Lens with a Fixed Subject

What happens when I have an overcast day with zero wind and subjects that are completely devoid of movement? I experiment. I will try things like spinning my camera over a cactus. Or adding a zoom lens to my camera and trying to zoom the lens during a longer shutter speed. I will also try panning the camera with subjects that have defined lines. The perfect example of this occurs while standing in an autumn forest on an overcast morning. I will pan the camera with the vertical lines of the tree trunks using a shutter speed around 1/10 of a second.

The results when trying these methods are extremely varied. So you need to be patient and look at your camera’s LCD after every photo. Trying a creative motion experiment like this with film could take hundreds of rolls to yield likable results compared to using a digital SLR. You now have the ability to truly experiment with any concept. 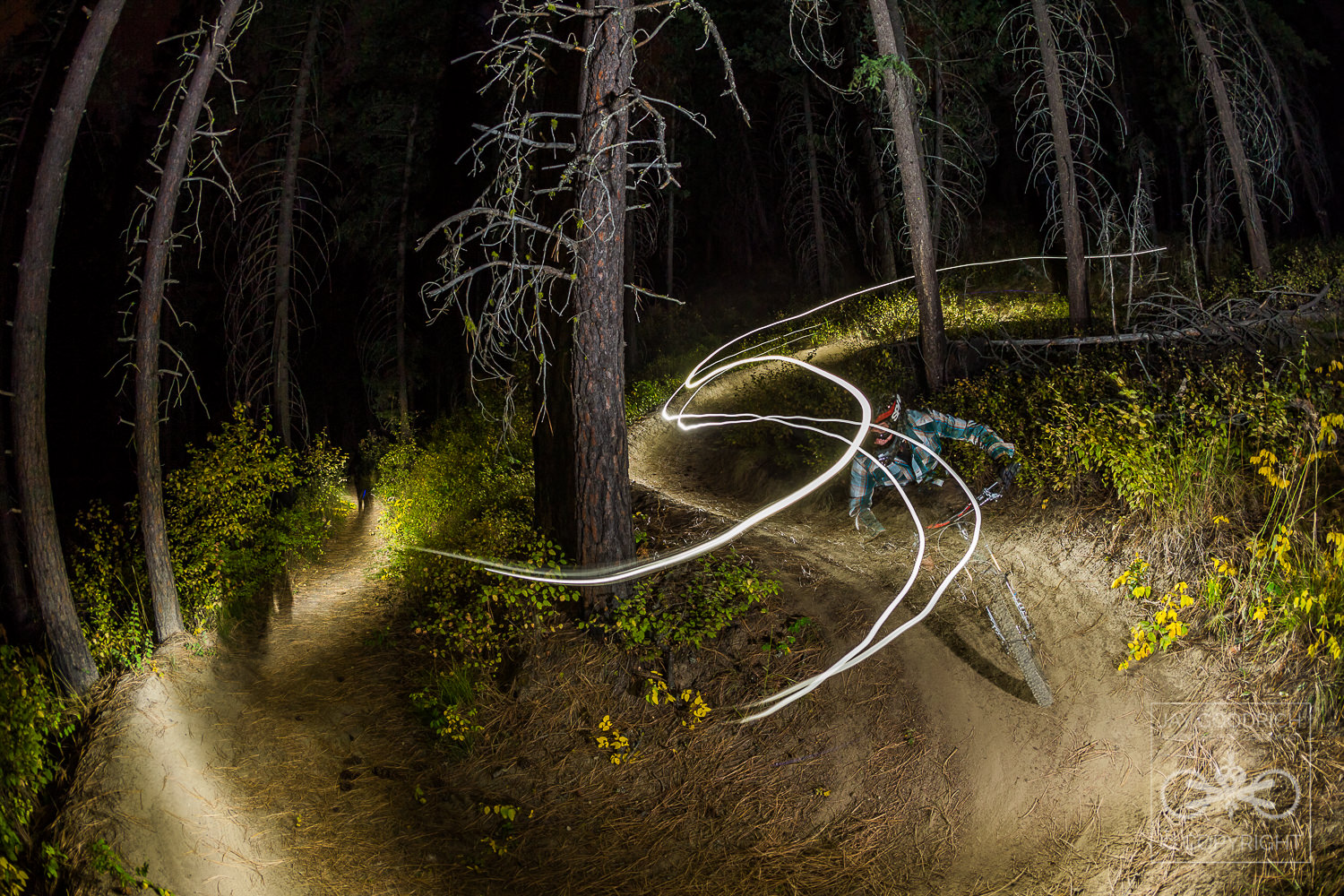 Stabilize the Camera with a Moving Subject Adding Flash

If you read my article from last month on creating star timelapses, I discussed the holy grail timelapse. This type of timelapse is created by shooting from sunrise/sunset well into dark as the stars begin to move across the sky. Artistic motion in still photography has its own form of holy grail shot.

This type of photograph highlights movement by not only blurring it, but by freezing it as well. How can we pull this off? By adding an off-camera flash. Flash gives you the ability to freeze just a millisecond of time which yields a ghost in a field of blurred motion.

To start, you need to have a moving subject. It is best to have an assistant to help on this one too. You also need a tripod, a flash, and a lot of patience. In this case, I used a mountain biker riding in the dark. I used the rider’s lights to illuminate the trail and create the blurred motion lines as he rode through the switchbacks.

After a bunch of trial and error, I figured out that my rider was making it through the switchbacks in 8 seconds. That became my shutter speed. We tried a bunch of different flash settings, but settled on my assistant manually releasing the flash several times during the camera’s exposure.

His first flash pop happened exactly where you see the ghost of my mountain biker. Then, within the remaining seconds of my exposure, he popped the flash to light up various parts of the forest. It took us 15 tries to get everything exactly the way we wanted, but the rewards were a photo that I hadn’t seen before. I can honestly say that trying something different has never let me down from a creative photography standpoint.

While this style of photography can produce many failed attempts, I feel that the keepers really highlight something different and unique. It also allows us to stay one step above any photographer who just uses a camera to create snapshots. We need to think about an artistic motion photograph, and any time thought is involved, creativity begins to boil. So next time you are out exploring with your camera and a moving subject catches your eye, try to illustrate that subject in an artistic way.

Looking to build upon your current photography knowledge-base? Join us in an upcoming photo adventure. We not only take you to amazing locations. We teach you how to focus on being a creative photographer not just a technical one.

CHECK OUT OUR CURRENT PHOTO ADVENTURES